Hi Everyone! Another day and another blog post from Fátima! It has been an eventful two days since my last post. I will not go into all of the details, but will give a basic run-down.

First, I did check out that store that seemed to be LCHF friendly. Indeed, it had a number of items that were friendly. They even had organic coconut oil! Unfortunately, what I did not think about was the fact that I need a stove to cook said LCHF-friendly foods! I don’t have access to a stove, so, yeah, I’m in a bit of a pickle. I bought some cheese though, just to show support, and I wish to give the place some business. So, fellow LCHF folk, here is a store that you may want to check out while in Fátima: Mercearia Biológica.

I also asked about a local supermarket and was directed to the nearest one to the Sanctuary. It is right by the bus station (of all places). Again, LCHF people need access to a stove, but you can find some friendly items here: Pingo Doce 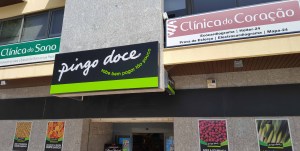 In the meantime, thank goodness I had at least the foresight to pick up some Atkins bars. These are what will get me through in a pinch. The same cannot be said for beverages though. What I would not give for a nice—and COLD—Diet Hansen’s or similar beverage right now! I would even settle for flavored water! If there is someone in Fátima who is LCHF friendly and knows better the lay of the land—S.O.S.! In the meantime, Our Lady asked for sacrifices and so I can go without for a time if need be.

LCHF stuff aside, today was the opening of the Mariological Congress. I am very excited about it. There are some true giants here and it is a humbling experience to walk among them, and actually hold conversation. We were also given nice white bags with information at registration. They are very impressive: 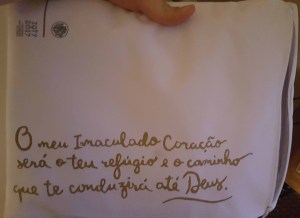 I spoke with a priest from Russia today and got the story from the “on the ground” approach about the latest happenings in Russia with respect to questions of faith. He disputed Western media portrayals of Putin. I will be thinking about what he said and try speaking with this priest again.

My talk, On the Third Part of the Secret of Fátima, is scheduled for Thursday, 8 September. Today I discovered that Frère François de Marie des Anges of Abbé de Nantes fame is present in Fátima for the Congress. For those who do not know, he wrote the book Fatima: Joie Intime Evenement Mondial which was translated into four volumes in English. The last book, Fatima: Tragedy and Triumph is a notable source on the third part of the secret.

Frère François and I actually met and held a (mostly) intelligible conversation in French. He showed me his program and he had already marked out my talk in red ink as a topic of interest for him. If he shows up and understands English well enough, that Q&A session may see more fireworks than I originally thought. Please, dear friends, pray for me ut in omnibus glorificetur Deus!

Today I also visited with a fellow Marian devotee from America the exhibition of various artifacts at the Basilica of the Most Holy Trinity. I saw Sr. Lúcia’s glasses, Bl. Jacinta’s apron and Bl. Francisco’s rosary, amongst other things. I did not realize how tiny Bl. Jacinta was! 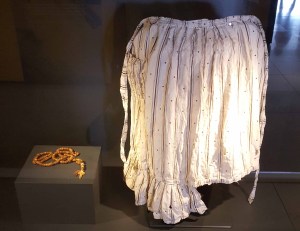 If I am asked what is the single most notable thing that I have experienced so far, my answer would be “context.” One can sit and read a book about Fátima, or even lots of them, but visiting the place is much different. One sees the context much more clearly. I am learning a lot—more than I can say in a simple blog post or two. Some things, as well, need not be said because they are things that transpire deep within the heart where God dwells and speaks to the soul.

Earlier today I was interviewed for a documentary about Fátima. More on that as it becomes available. Tomorrow I have an important personal meeting and a local gentleman is serving as translator. He owns a business and I would like to send some Internet traffic to him when I have the time to organize better my material and thoughts.

Finally, while I did not get as much as I would have liked, I did purchase several books from the Sanctuary bookstore. More on that in another post.

Please pray for us!