I have written about Dr. Taylor Marshall’s questionable book Infiltration. I have also frequently found myself holding my head in my hands or having a gaping mouth when I see things on Marshall’s Twitter feed.

Yesterday was one such day.

I went to see what the latest news was coming from Marshall and I discovered what appears to be some cognitive dissonance.

First, Marshall issued two tweets (first and second) about how he has noticed fighting on Twitter

I’ve noticed an increase in fighting on #CatholicTwitter. The Devil wants that. The Holy Ghost is not the author of confusion. Let’s pray for each other and prepare for Holy Advent. Christ is coming. Let’s live in His peace. Don’t give the evil one what he wants.: 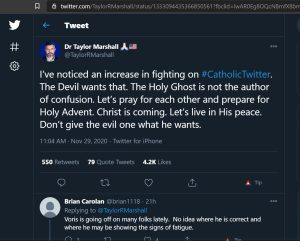 He then issued another tweet concerning the recent visit of Pope Francis with Pope Emeritus Benedict XVI, asking “2 Popes?”

Not content to raise such a contentious and ridiculous issue, Marshall then creates another tweet wherein he gives a poll soliciting people’s opinions about “Who is Pope?” Here’s an image: