Hi! Today has been a funny day. I was up a little earlier and went about my morning business. I came across an article with a rather long quote from Pope Benedict XVI when he was Fr. Ratzinger. This quote is on the future of the Church and it makes its rounds in the Catholic blogosphere every so often. The last time it did, I obtained a copy of the book wherein the quote can be found entitled Faith and the Future. Ratzinger’s observation is something upon which one should reflect. Just make sure you read it in context! Perhaps I shall share in a later writing one observation that I made from this reading.

I had a 9 a.m. breakfast meeting with Dr. Mahfood at a local restaurant called the Benton Park Cafe. 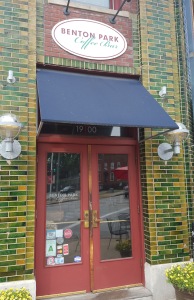 Being on a low-carb diet, one must be very careful about what one eats, so I settled for eggs and bacon. I was informed by the server, Andy, that the bacon had no sugar in it. The poor guy had some broken fingers and an immobile right hand, yet he went about his work as if there was no hindrance. It was inspirational.

After meeting with Dr. Mahfood, I went off to the Pius XII Library. It has been 3 years since I was last in this library and their theology collection is rather impressive. It is quite possible for me to become lost in such a place.

When I left the library I took a couple of pictures: 1) The famous Church of St. Francis Xavier and 2) the statue of Ven. Pius XII outside of the library. 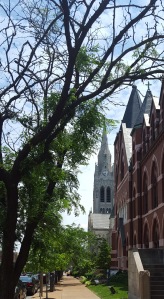 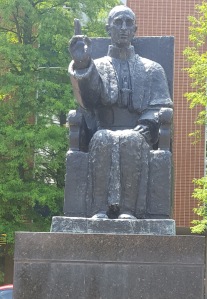 The picture of St. Francis Xavier is from the vantage point of outside of the Pius XII Library. My meter was close to running out and I did not want to walk the entire distance. It is the lighter-colored building on the right (after the red one). This parish is famous because of its connection to the infamous 1949 exorcism case.

From the library, I then headed down the street to the Cathedral Basilica of St. Louis. This is a stunningly beautiful Cathedral. Its mosaics are the stuff of legend. I’ll let the pictures speak for themselves. 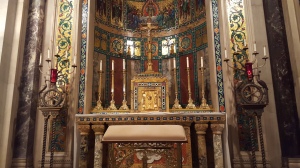 I arrived just after 12:30 and was present for the end of the 12:05 Mass. I noticed that the priest and people recited the Prayer to St. Michael the Archangel prior to leaving the Sanctuary. While there appears to be nothing about this on the Internet, I have heard from the local chatter that Archbishop Carlson may have had something to do with this matter. Little did the priest know that present in the Cathedral is the one person who wrote the book on the subject!

From the Cathedral I headed over to my friend SJ’s place of work. Arriving at the same time I did was a lady I had not seen in a good number of years. We had a pleasant conversation about a mutual acquaintance and then on some contemporary issues.

Later this evening I have plans to meet up with another friend, “BK”, and some of his friends. I look forward to this meeting as the conversation, I suspect, will be quite spirited.

Tomorrow I head to Wisconsin where I will be until Friday. The time in St. Louis has flown by so very quickly. Alas, however, the Summer of 2016 Road Trip must go on!

I would also like to announce that I will be giving a talk on the Prayer to St. Michael next week in Indiana. If you are interested, please E-mail me for more information.