Hello Everyone! I am rather tired this evening and so this post will be short.

The Rosary procession last night was beautiful. Please forgive the poor quality of this photo:

I like to walk near the bier carrying the statue and tend to get a little emotional while singing the Ave Maria.

It was a late night, having arrived back at my room around 1 a.m. and was up around 7:10. The Congress started at 8:30. I went over to the Centro Paolo VI (Paul VI Center) to register. Turns out that I did not have to pay the registration fee. I must have misunderstood the directions when I signed up.

Prior to the opening address, the two living Bishops of Fátima were sitting next to each other and I snagged this photo: 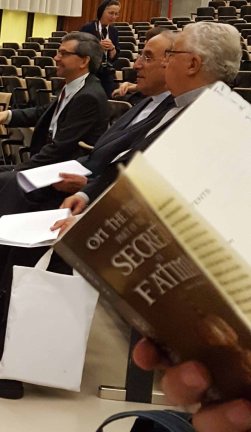 You will never guess who is holding my Fátima book. I will send a free copy to one lucky winner if you E-mail me with the right answer. I only have one rule: You cannot know me, nor can you tell me the answer from someone who knows me or who already knows the answer.

Afterwards, there was the formal opening of the Congress…

…and then the first talk by Dr. Marco Daniel Duarte:

He made a good point about the documentation of Fátima becoming more known and available. Excellent observation, and thank you Dr. Duarte! Someone asked him about the interpretation of the third part of the secret of Fátima. I did not know what to expect, but I fought the urge to stand up, hold out my book and say “here you go!” I thought Dr. Duarte answered well the question. Interesting fact: he revealed that he had been to the CDF Archives in Rome and looked at the third part of the secret.

We had a break following Duarte’s presentation. Next up was Fr. Eloy Bueno de la Fuente:

He discussed the interpretation of Fátima and I appreciated hearing that angle. It is going to be an area of discussion for Fátima scholars very soon, I suspect. Fr. Eloy is considered by some people to be the best writer on Fátima after Sr. Lúcia. I cited him in my book and hope to learn a little more about him while he is here.

It was lunch thereafter. I went to a friend’s place, and then returned to my hotel room for a brief period. I walked back to the Centro Paolo VI around 2:30 p.m. or so. I talked for a bit with a couple from Malta about a specific alleged private revelation. Then, around 4:10, I went over to the room where I was presenting my paper. There were about 2 presentations ahead of mine so I just sat and listened as best I could. Their PowerPoints helped as I could at least read the Portuguese.

At 5:30, I was announced and took my place up on the stage. It was the same one from the Mariological Congress last year (humbling!). I did not take any photos, though a representative from the Sanctuary did. An audio recording was made as well, though no video was made either through Skype or Facebook. People told me afterwards how much they appreciated the talk and I had some good conversations on the way out of the Centro. They were so good, in fact, we were among the last to leave before the doors were shut!

I was permitted at the end of the talk to make a sales-pitch for my On the Third Part of the Secret of Fátima book, so I took the opportunity. I’ve been asked if there will be a Portuguese translation. I hope my publisher is reading this!

Now, I am back in my room where I may stay for the rest of the night. I’m fighting with myself as there is a documentary showing on the other side of the town and I want to go. Being tired and all, I’m just not sure it is smart.

Oh, and if anyone wants to know how we listen to the major talks of the Congress, here is a photo of the devices for translation: