Hello Everyone! This is blog entry number 5 of my latest adventure in Fátima!

I had a great time at the conferences this morning. The first talk was by Dr. Stella Morra of the Gregorianum in Rome:

She got some good laughs from the audience.[i] To be honest though, I did not pick up much from her talk as I did the next one—which was by Dr. António Matos Ferreira:

One of the themes for which I argue in On the Third Part of the Secret of Fátima is that much of what we know about Fátima comes from the mind of Sr. Lúcia. It is important, therefore, to incorporate a healthy anthropology within our discussions of Fátima. My own paper treated this topic, and Dr. Matos Ferreira underscored the cultural ramifications of Fátima.

The point that really struck me was his discussion about a kind of “mistrust” between Rome and Portugal. Dr. Matos Ferreira did not want to be too specific or too general, but (and according to our English translator), there was some difficulties between the Roman Curia (particularly through the old Propaganda Fidei Dicastery) and Portugal from the 19th Century into the 20th.

I was the last to speak during the Q&A session, and I asked Dr. Matos Ferreira to elaborate upon this matter.[ii] He expressed a wide knowledge of the subject, and, afterwards in private conversation, made a salient point: we simply cannot make many conclusions at this time because the documentation is not yet available.[iii] I could have done a dance on the spot.

After this talk, we broke for lunch. I went to the local grocery store, Pingo Doce, and purchased some chicken and citrus-flavored water. I returned to my hotel room around 1:30 p.m. or so and ate lunch. I went up to my room and got ready for an appointment. Guess what that appointment was?

If you guessed: study-time at the Fátima Archives, then you win!

I was in the Archives for a little over three hours. I got to see a couple of the guys from September. The Portuguese are quickly climbing to the top of my list of the most hospitable people. The Studies and Diffusion department staff have been very kind to me. It was the least that I could do to mention them in the Acknowledgements section of my book. Some of them did not want to be named, so I made it a general reference to the entire staff.

At any rate, the time in the Archives was very fruitful. I had planned ahead and the staff had some materials out and ready for me to peruse. They even obtained some materials about which I had made inquiries on the spot. I shall not discuss what I was researching, but a couple of photos were taken of me looking at a research item. Owing to Sanctuary policy, I am unsure whether or not I am permitted to publish them. If you are, however, a friend, I’ll be happy to show you in person!

The Archives were closing at 6 p.m. and I was about wrapping up my work around 5:30. I walked back to my hotel room where I have started to relax for the evening. That concert, Cantar Fátima, sounds good and I hope to go. Last night was the informal discussion at the Centro Paolo VI. I cannot say that I got too much out of it.

One of last night’s panelists was making a documentary on Sr. Lúcia and I am quite interested in it. As I said in the Epilogue to my book, we are entering into a new phase of Fátima’s history, one that will be marked by study of the person of Sr. Lúcia. Already some books have appeared in Portuguese (I keep spending way too much money on books and I’m developing a plan on how to get them home with me).

A final note: it seems as though the long arm of American fast food chains has reached even to Fátima: 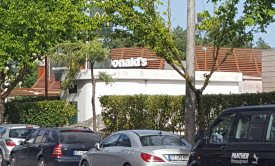 Well, that’s going to be it for this update. May you all be blessed!

[i] After her talk, I spoke with a priest from Latvia(?). I hope to speak again with him on Saturday.

[ii] Interesting side note: Someone else also asked a question. While I do not remember what it was about, the English translator, immediately after translating, clearly expressed his exasperation with the question with a two-word spontaneous outburst. I looked over at an Irishman sitting to my left and asked, “Did he just say what I thought he just said?” Through laughter, he said, “Yes he did” (or words to that effect).

[iii] He mentioned, for an example, Cardinal Casaroli. Of course, once that name came up, I had to ask about Ostpolitik, which we then discussed briefly.