Hi Everyone! Blog post of Fátima adventures #6 is now here!

Last night I went to the Cantar Fátima concert. It was very beautiful. Here is a picture of the aftermath of the event (I was recording with my phone and so did not take pictures during the performance):

I was up late talking with someone and did not get to bed until after 1 a.m. (local time). I was up around 7:30 for the last day of the Congress. Lauds in Portuguese was at 9, followed by the first talk by Dr. Alfredo Teixeira:

He helped me to formulate a question about the impact and/or reception of Fátima in relation to other peoples and cultures as well as locally. After his talk, there was a break from 11 to 11:30 a.m. During this time, I had the opportunity to speak with the former rector, Msgr. Luciano Guerra. It was a pleasant conversation and he expressed interest in On the Third Part of the Secret of Fátima.

The next, and last, session of the Congress was by Cardinal Ravasi:

Forgive the far away shot. I was compelled to sit up in the back during the Cardinal’s talk after talking with Msgr. Guerra as the session was starting as we were ending our conversation. I did, however, get to speak with His Eminence (around 4 p.m.) after the closing session. He was kind to take a photo with me:

No, there was no shameless promotion of the book here in the photo. I did show it to him though and, like Msgr. Guerra, he expressed interest in it. It pleases me to know that there is genuine interest in this topic among the hierarchy.

Just prior to the closing session, I experimented a bit with some features on my camera. Here are some photos that I took: 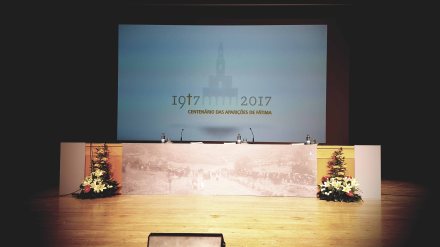 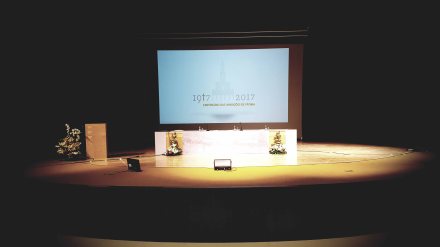 Finally, I was able to get a photo with some of the good folks at the Secretariat (the lady on the right of the photo was a fellow participant, not a member of the Secretariat):

Afterwards, I went to Confession, Pingo Doce, and then back to my hotel room. Most likely I will go to the Rosary procession tonight and then retire for the evening. Tomorrow will be a big day, but more on that later.

For now, take it easy folks! Until next post!