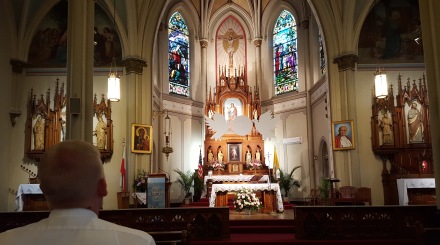 I finished my trip in Arkansas on June 10th. My friends and I had a great conversation until about midnight. The conversation was on matters relating to faith, morals and some issues within contemporary American society. It was rather intellectually stimulating, for me at least, and I hope it was for the others. Earlier in the day I was able to visit my old college friend. He was getting ready to leave his work in order to tend to some family business. We found a little time and I am grateful for our visit.

My sincere thanks to my friend “RD” and his roommate “GJ” for hosting me. If I am able to get back up that way, I would like to do so again.

The next leg of my journey is St. Louis, MO. It took about 5 hours to get there from where I was in Arkansas. The long drive did not appeal to me, but, admittedly, the time and the miles seemed to fall away rather quickly, thankfully. Some business with all things private revelation came up while I was driving. While it is not my story to break, I do have permission to whet your whistles a bit. There is some notable news coming down the pipeline concerning the recent events with the alleged apparitions in Lipa.

I got into St. Louis around 2:30 p.m. (CT) and went to my friend’s (“SJ”) place of work. He had asked if I could pick him up when he got off at 3:30 and save his wife a trip into the city. She is a few months along being pregnant and so any “stress-savers” are appreciated.

It is good to be in St. Louis where there is a very strong Catholic community. Thankfully, there are several people with whom I am acquainted and “plugging into” that community is a relatively short process for me. Yesterday I went with SJ and his family to the St. Gabriel Parish Picnic where there was a parade, rides, food, and games.

I got to meet some old friends and even to meet Dr. Sebastian Mahfood of Holy Apostles College and Seminary! He is my connection to En Route Books and Media which has published my book Refractions of Light.

It was a long day that tired me out but I am grateful to have visited with people and participate in the local scene.

Today my friends and I went to St. Agatha’s Parish for the 8 a.m. Mass. This is a Polish parish in the Archdiocese and it was absolutely stunning. Below are some pictures that I was able to take. The pastor, Fr. Hubert Zasada, was hearing confessions prior to Mass, and Adoration was going on at the same time. The pastor struck me as a rather joyful man, and he even made it a point to greet and talk to me for a bit after Mass.

When it came time for the homily, Fr. Zasada told a story about a wedding and a funeral and how people laugh and cry at different points during these. He then made an observation about American culture in relation to today’s Gospel passage. The “sinful woman” was weeping while she was washing and drying Jesus’ feet. Father made the observation that in America weeping is seen as a sign of weakness, of not being strong, and he lamented this fact. Weeping over our sins is something that we need to do, begging for the Lord’s mercy.

I thought Fr. Zasada was spot-on. Weeping is a cleansing act and it reminds us of who we are as creatures—creations of the Eternal Father and adopted sons and daughters through grace in Christ. It contributes towards the breaking of pride and self-love. I thought back to a remark by Pope Benedict for us to do penance. Let us also not forget his Discourse in 2008 wherein he touched upon this realm as well.

The importance of penance and weeping is something that we do need to recover. While out doing some errands on June 9th, I was told a story about an exorcism that had happened in Arkansas. I will not relay the details; it suffices to say that the story reminds me of a recent revelation by Fr. Chad Ripperger. He stated that the devil once said to him during an exorcism that it is self-love whereby he has a great foothold within the Catholic Church today.

The rubrics (#s 5, 14-15, 20) for the Rite of Exorcism in the old Rituale Romanum are explicit in informing the exorcist to be on guard against statements made by the evil spirits. The statement, however, as revealed by Fr. Ripperger, I take as a call to penance and to weep over our sins. God is infinitely more powerful than the devil (there is actually no contest there) and such a statement ought to remind us of what is truly important, namely God and our supernatural dignity and end.

I once read in the writings of St. Teresa of Ávila that at some point in her life she was hearing much about the devil from people around her. She would rather, she said, shout out about God who was more interesting. The fantastical stories that we hear (often of a Hollywood brand), while dramatic and sensational, remind us that the devil and his angels can do certain things. These are, however, parlor tricks intended to deceive or dishearten. There is nothing spiritually deep about them and only serve to arouse curiosity-seeking. God, on the contrary, is the still, silent voice that convicts and heals. In short, He brings peace whereas the devil brings unrest.

Contemporary American society has a penchant for worrying about stress. Why, then, aren’t we talking more about the action of God who brings peace?

I find myself reflecting upon God’s actions during my road trip. Whether it be on the road or visiting with friends, I try to develop the interior habit of reflecting upon what God is doing and/or wants to show me. Thus far, it has been interesting to watch, observe and listen.

This afternoon I was able to visit with a couple of other friends from college, “SE” and “SA.” We went to the local Applebee’s restaurant for about an hour or so. These were friends that I have not seen in about 10 years and they have 3 kids now ages 8 to 1. It blows my mind to see my friends at this point of their lives and it gives me pause to wonder about my own life.

This evening, I visited with another friend who lost her husband a couple of years ago. I could not attend his Requiem Mass, and I would like to pay my respects in person whilst here.

Let us remember to pray for the dead!