I noticed today on a Twitter feed a criticism of a monstrance used in Fátima by Pope Francis. The criticism contrasted the monstrance with another one given by the Irish.

I offer no comment about the aesthetics and eye appeal of either monstrance. I do, however, wish to make an observation.

From my time in Fátima, not just my study of the phenomenon, but my actual experiences in Fátima proper, I learned about the Irish monstrance. In short, I was told that it was very heavy contains pure gold and studded with numerous precious gems. In other words, very valuable. For more information about the monstrance, I recommend you visit these web sites:

So we have weight and value to consider here. Let me add one more component: Pope Francis’ extraordinary Urbi et Orbi blessing on March 27, 2020.

Does anyone remember what happened after the imparting of the blessing? Pope Francis turned around and walked back to the altar inside of St. Peter’s. His walk was not healthy looking, and the monstrance was lilted. Here is the visual:

Clearly, Pope Francis was struggling. The man is over 80, has part of a lung removed and wears special orthopedic shoes. Does anyone really think he would have used the Irish monstrance?

Based upon everything considered here, I think it is a bit unfair to criticize Pope Francis for not using the Irish monstrance.

The British publication Mass of Ages graciously accepted part one of my book review of Taylor Marshall’s Infiltration.

I am happy to say that the Summer, 2020 issue is now available for free viewing. Turn to page 40.

You are not going to want to miss this one, folks. Trust me.
-Kevin 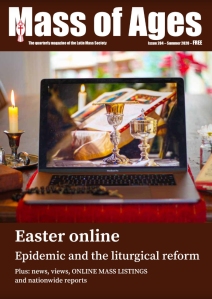 Infiltration: The Plot to Destroy the Church from Within (Manchester, New Hampshire: Sophia Institute Press, 2019) by Dr. Taylor Marshall: a Review.
Kevin Symonds 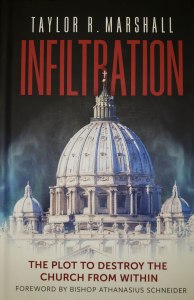 In this book, Taylor Marshall firmly maintains that the Catholic Church has been literally infiltrated by her enemies, thereby experiencing a massive campaign of disruption and distortion. A particular area in which Marshall advances this thesis pertains to the influence of the Vincentian priest, and later Archbishop, Annibale Bugnini (1912-1982) in the liturgical reforms of the mid-twentieth century. This review focuses on Marshall’s presentation of Bugnini’s influence upon these reforms and in particular of Marshall’s claim that Bugnini was involved with Freemasonry. It will be argued that, despite his eagerness to find evidence of ‘infiltration’ and his animus against Bugnini, Marshall actually misses some important evidence in favor of Bugnini’s membership of the Italian Freemasons.

END_OF_DOCUMENT_TOKEN_TO_BE_REPLACED

It was just brought to my attention that the EWTN program “Vaticano” published a two-part documentary entitled The Secret of Fatima Explained.

This article, written by Fr. Matthew MacDonald for Catholic World Report is, perhaps, one of the best articles that I have read in a long time. It is well worth the read!!

One of the major box office hits in 1999 was the Wachowski Brothers’ film The Matrix. A famous scene in the film is when Morpheus (Lawrence Fishburne) offers Neo (Keanu Reeves) a choice between a red pill and a blue pill. The concept of choosing the red pill or “red-pilling” refers to the journey of personal realization and integration of the full truth of reality, beyond one’s personal preferences and experiences alone. In the movie, the choice of the red pill or the blue pill has its consequences. The choice of the blue pill brings about a life of ignorance and confined comfort and slavery within the façade of the digital dream world to machines that is the Matrix. The choice of the red pill, however, will free Neo from the enslavement of the Matrix. This would be a path towards an uncertain, unstable future, living the full truth of reality in all of its raw difficulty. Neo chooses the red pill and Morpheus serves as a guide for Neo in adjusting to the harshness of this new reality, helping him to become “the chosen one” that he was destined to be.

This “red pill/blue pill” analogy is an apt description of a spiritual journey taking place today in the lives of many Catholics. This awakening is marked by a coming to terms of these Catholics with the truth of the reality of the sin, evil, and corruption presently infecting the human nature of the Church. Examples of this infection manifest through teaching errors in faith and morals, banal liturgies in parishes, and the failure by some of the Church’s pastors and lay members in leadership positions—to say nothing of the clerical sex abuse scandals in recent years.